Using Drones in the Supply Chain

By now most of us have heard about ongoing efforts by Fortune 500 companies such as Amazon, Google, and Wal-Mart to use unmanned aerial vehicles, drones, to perform final mile deliveries of small packages to their customers. But it turns out that the business case for using drones by businesses further upstream in the supply chain might actually be stronger.

In the recent past, using drones in the U.S. was limited to recreational flying only whereas using them in commercial operations remained a grey area due to lack of clear regulation. Luckily for last-mile operators aspiring to deploy drones in customer deliveries, drone delivery came closer to becoming reality in June of 2016 when the Federal Aviation Administration and the Department of Transportation issued final rules covering the use of drones in the U.S.

According to the FAA's FAQ Page regarding using unmanned aircraft systems (UAS), commercial delivery of packages using drones in the U.S. is now allowed under the following conditions:

Part 107 permits the transportation of property for compensation or hire, provided the operator complies with all the provisions of the rule, including that the operator must keep the UAS within his/her sight, the flight is conducted within visual line-of-sight and not from a moving vehicle, external loads must be securely attached and cannot adversely affect the flight characteristics or controllability of the aircraft, and the aircraft with payload must weigh less than 55 lbs. at takeoff. The transportation must also occur wholly within the bounds of a state and may not involve transportation of property between: (1) Hawaii and another place in Hawaii through airspace outside of Hawaii; (2) the District of Columbia and another place in the District of Columbia; or (3) a territory or possession of the United States and another place in the same territory or possession.

Obviously the requirement by the FAA for drones to remain within visual line-of-sight (VLOS) means that commercial drone delivery may not be feasible for all customer deliveries since a typical line of sight can be quite limited. VLOS is usually limited to 200-300 meters horizontally for smaller UAS but can reach 3-4kms for the larger drones that are likely to be deployed by carriers especially if they are suitably colored and fitted with high-visibility lighting.

But even with these restrictions, industry experts estimate that Part 107 can generate $82 billion to the U.S. economy and create more than 100,000 jobs over the next 10 years. The cost savings of deploying drones in last-mile deliveries is beyond dispute. For instance, Amazon Prime Air drone deliveries can ship out packages to customers several miles out from Amazon warehouses in just 30 minutes or less at a cost of just $1.00, or at least five times cheaper than conventional road delivery. The chart below compares delivery costs of a small package between Amazon drones and traditional carriers such as UPS and FedEx. 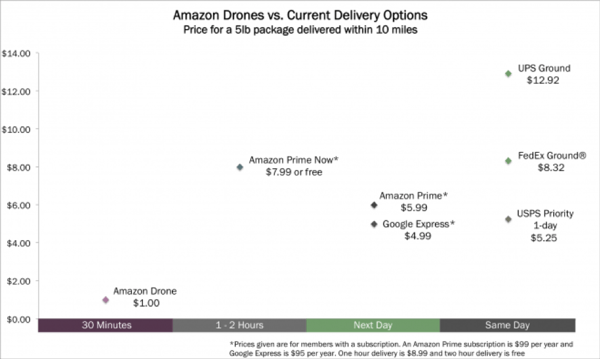 But direct-to-customer deliveries is just one of the roles that drones can play in the supply chain. Drones can also be employed in in-warehouse operations and within the manufacturing yard. Such operations include:

You can use drones to take over the tedious work of stock taking and record keeping. By equipping a drone with sensors, you can scan your barcodes and RFID tags for physical inventory taking. Drones can also be used for moving small items around the warehouse faster than forklift trucks. Drones will not completely eliminate the need for skilled workers but can result in lowered headcount.

Drone surveillance can also be useful for preventing employee accidents by detecting high-risk areas and for reviewing accidents when they occur.